A cordon is in place near a McDonald’s by the A5 after a stabbing.

Police were rushed to Colindeep Lane and Zenith Close just close by the McDonald’s following a stabbing at around 6.40pm today.

Metropolitan Police are asking for people to avoid the area including local restaurants as road closures are in place.

There is a large police presence at the scene of the McDonald’s car park with at least eight police vehicles spotted.

The McDonald’s is cordoned off (Photo: Corey Froggatt)

An air ambulance was also seen by the crime scene.

One eyewitness however says that the victim was led away in a ground ambulance.

The victim is believed to have been taken away by an ambulance (Photo: Corey Froggatt)

No arrests have yet been made. 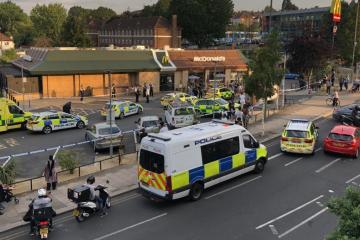