People fleeing London last night ahead of the new Tier 4 restrictions were “irresponsible,” the Health Secretary has said.

Some of the capital’s train stations were packed with passengers as people appeared left the city to be with family for Christmas.

“This was clearly totally irresponsible behaviour, the Chief Medical Officer was absolutely clear that people should unpack their bags,” Matt Hancock told Sophy Ridge on Sunday.

“I think that it’s relatively small numbers and the large vast majority of people throughout this whole pandemic have followed the rules, been responsible and played their part”.

Mr Hancock added that the new strain was “out of control” which necessitated the new tighter restrictions.

Last train out of Saigon. Queue at St Pancras as we wait to board the Leeds bound train. pic.twitter.com/cFDBDNnYFC

“Unfortunately this virus, the new strain was out of control, we’ve got to get it under control, the way we can do that is by restricting social contact,” he said.

Everyone, especially in Tier 4 areas, “needs to behave as if they might well have the virus and that is the way we can get it under control and keep people safe,” he added.

Mr Johnson told a Downing Street press conference at 4pm on Saturday that the rules would come into effect at midnight.

By 7pm on Saturday evening, there were no trains available online from several London stations including Paddington, Kings Cross and Euston.

Harriet Clugston said that people on board the trains had attempted to secure space for themselves, but that there was not enough room to do so.

“As expected, train is crammed,” she wrote on Twitter.

“Announcement on Tannoy says social distancing ‘will not be possible’ due to volume and to get off if you are not comfortable with that.

“People have tried to secure social distance by placing on seats but being asked to remove them by other passengers as the train is so full.”

The tough new restrictions put more than 16 million people living in London and eastern and South East England into a two-week lockdown from midnight.

Affected areas include Kent, Buckinghamshire, Berkshire, Surrey (excluding Waverley), the boroughs of Gosport, Havant, Portsmouth, Rother and Hastings, all 32 London boroughs and the city of London.

Boris told around 20 million peiple in Tier 4 they will not be able to see their families this Christmas due to his tough crackdown.

He warned the nation he could not ignore the terrifying new strain and vowed: “We have to act to protect the public.”

Under the new Tier 4 rules non-essential shops have to stay shut and people are also limited to meeting one other person from another household in an outdoor public space.

A review of the Tier 4 measures is expected to take place on December 30.

It’s not guaranteed that the affected regions will exit Tier 4 on the review date. 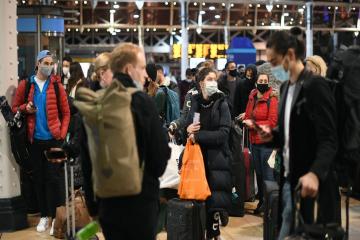