Current schemes that encourages walking and cycling and lessens traffic during the pandemic has been criticised by Harrow Conservatives.

More than 4,000 people signed a recent petition calling for Harrow Council’s decision to create low-traffic neighbourhoods as part of its ‘StreetSpace’ programme to be reverted.

As part of the new measures, street planters have been installed to prevent cars travelling down certain roads which, the petitioners argue, has created major traffic issues elsewhere and interrupted access for emergency services.

And during a cabinet meeting, a petition was addressed as well as seven questions from members of the public about their “distress” from the roadblocks.

Leader of Harrow’s Conservative councillors, Cllr Paul Osborn, pointed out that the scheme had gone ahead in Labour wards, and criticised the implementation of new cycle lanes in Honeypot Lane and Uxbridge Road.

Cllr Chris Baxter spoke out on behalf of residents in Manor Way and Priory Way, who have seen a large increase in traffic and congestion due to the roadblocks installed in Southfield Park.

He questioned whether a thorough assessment of the roadblocks’ consequences on surrounding roads had been carried out.

In response to a member of the public who called for the LTN scheme to be scrapped, environment portfolio holder Cllr Varsha Parmar said: “It is true that the accelerated delivery of the schemes to address the health emergency has meant that the public consultation that was undertaken is different from the normal process and more limited than what we would normally do.”

She expressed that there is a monthly review on the scheme, with one approaching soon.

During her defence, she explained that there are residents who also do want the scheme and the council has to be “mindful of everyone’s concerns and contributions”.

In a previous newsletter sent out on October 20, Harrow Council leader Cllr Graham Henson called for patience when it comes to seeing the outcome of these measures, and he noted they will be reviewed after a six-month trial period.

He said that the council understood frustrations, but that issues would “settle” within a few weeks. 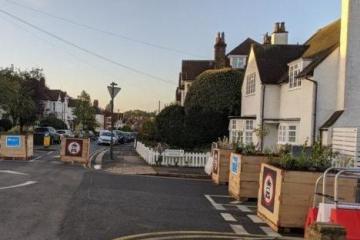