Coronavirus cases have increased in Harrow as the borough saw a week-on-week rise in its seven-day infection rate.

It comes after lockdown restrictions eased further on March 29, allowing outdoor mixing in groups of six or up to two households.

One of the worst affected areas in Harrow is Kenton West, which recorded 16 cases in the seven days to April 11 – this is a jump of 14 cases from the previous week.

Five were found in Wealdstone South and Canons Park, while four were recorded in Greenhill North, North Harrow and Stanmore Uxbridge Road.

To protect individuals’ identities, exact numbers are not provided for areas with fewer than three cases of the virus.

A further stage in the lifting of lockdown came on Monday, when pubs, hairdressers, non-essential shops and gyms were allowed to reopen – although hospitality venues can only serve people outdoors.

Infection rate data is based on figures from Public Health England published on the Government’s online coronavirus dashboard. It is subject to slight variations, as the figures are continually updated. 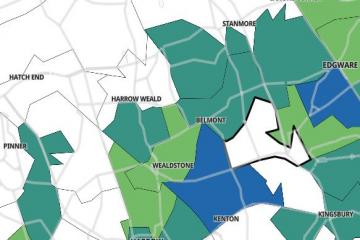 Patients at a London hospital are facing waits of up to eight hours at A&E, health bosses say.  Harrow Times | Local News …

A huge machete blade has been found tucked away on a footbridge that residents say has become a hotspot for stashing items. Harrow Times | Local News …

Planes will typically store toilet sewage in special tanks on flight and will dispose of them once landed. Harrow Times | Local News …

A man from Harrow is among three jailed for their roles in two shootings. Harrow Times | Local News …

If you have bought any of the items mentioned below, you need to be aware of these possible health risks. Harrow Times | Local News …