Londoners will have to wait two days to find out the results of the London Mayor and London Assembly elections, it has been revealed.

London Elects, which organises the Mayoral and Assembly elections, confirmed today that the results will be revealed on Saturday May 8, two days after voters head to the polls.

Votes will be counted over two days, starting on the morning of May 7, to ensure that social distancing can be maintained for the safety of those in attendance.

Mary Harpley, the Greater London Returning Officer who is responsible for delivering elections, said that Londoners will find out who their Mayor of London and Assembly members are “as quickly as possible”, adding “but votes need to be counted safely and accurately”.

She said: “Covid-19 has moved the goalposts. Everyone has had to consider different ways of doing things and elections are no exception. Indeed, these elections have already been postponed for 12 months. With social distancing restrictions, we are therefore splitting the count over two days.

“We rely on hundreds of people from every London borough to deliver these elections and we must provide a secure environment in which to work, as they enable the democratic process. In fact, the full range of people involved in these elections, including observers, candidates, agents and venue staff must be considered in our safety plans.”

The count will take place in three locations across London at the ExCel, Alexandra Palace and Olympia and will be coordinated centrally from City Hall.

Earlier in the year, sources in some local authorities had expressed concerns that not enough staff would be available to carry out the count due to Covid-related absences.

But London Councils, which represents all councils in the capital, has said “there will be enough staff to deliver elections”.

A London Councils spokesperson said: “London boroughs are working with the GLA and Electoral Commission to ensure all vote counts proceed safely after polling day. We can reassure Londoners than we have plans in place that prioritise public health and protect the democratic process. Despite the challenges presented by the pandemic, we believe there will be enough members of staff to deliver the elections.”

It is understood that spreading the count across two days will not involve more staff than if it was just held on one day, ensuring that there will be fewer people under any one roof. 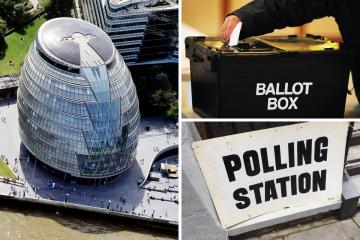