A London Assembly member was almost turfed out of Mayor’s Question Time today for claiming the Labour Party “doesn’t really like Britain very much”.

Brexit Alliance Group’s Peter Whittle said Labour is not a patriotic party, and condemned Sadiq Khan’s plans to remove statues in the capital.

But his comments sparked uproar among Labour Assembly members, who branded his words “disgraceful” and “offensive”.

Mr Whittle has repeatedly objected to a review of London statues proposed by the Mayor in the wake of Black Lives Matter protests this summer.

Demonstrators across the country highlighted the unrepresentative nature of Britain’s public history and condemned art that glorifies former slave owners.

A group of Bristol protestors tore down a statue of slave trader Edward Colston and in London, statues of Churchill and Ghandi as well as the Cenotaph were graffitied.

The Mayor condemned vandalism in the capital, but said its plaques, streets and art should celebrate all residents.

Speaking at Mayor’s Question Time today, Mr Khan said his plans for an overhaul have “captured the imagination of Londoners”.

“Our capital’s diversity is our greatest strength, yet our statues, road names and public spaces reflect a bygone era,” he said. “This can’t continue.”

But Mr Whittle said a “bygone era” is another word for “history” and argued no one has the right to decide “which legacies are celebrated”.

He claimed Mr Khan’s commission – which issued an open call for members last week – will not represent a range of views.

“These people on your commission are all going to be Mayor’s mates, aren’t they,” the Brexit Alliance Group member said.

“They’re all going to sing from the same hymn sheet, which is an ideological one.

His claims were met with outrage, and Labour’s Jennette Arnold demanded a formal motion to expel him from the meeting.

The London Assembly chairman can ask a member to leave if they fail to follow instructions, “behave disruptively or offensively” or obstruct the business of the meeting, according to Greater London Authority rules.

The Brexit Alliance Group member initially refused to withdraw his statement or apologise, claiming it was a “very very fair comment” and a “political remark” not aimed at an individual.

And with Green members also condemning Mr Whittle, he looked set for expulsion.

But moments before chairman Navin Shah moved to a vote, Conservative member Gareth Bacon intervened, arguing that the motion set a “slightly dangerous precedent” that was “effectively ruling out free speech”.

Mr Bacon suggested Mr Whittle withdraw his comments but not apologise – which the Brexit Alliance Group member agreed to do.

Moving the meeting on, Mr Shah urged members to avoid “any kind of comments that could be offensive or inflammatory” in meetings.

“It does not look good on the role that we have as democratically elected members,” he said. 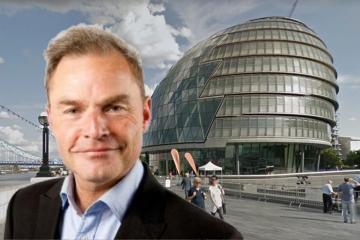 Snow has caused traffic disruptions on the M1 as some parts are completely blocked off. Harrow Times | Local News …

More than 500,000 Londoners have now been vaccinated against Covid-19, but the capital is still lagging behind the rest of the country. Harrow Times | Local News …

A woman has died after she was hit by a car just one day before she was due to celebrate her 62nd birthday. Harrow Times | Local News …

A former Brent Council leader called on three current councillors to resign after they attended a charity event during the national lockdown – though it has been dismissed by the local Labour Group as “political point scoring”. Harrow Times | Local News …